A Behemoth moves towards my sheltered archer and magic user, triggering a reaction shot (which unfortunately also triggers his ability to act again). Meanwhile, my knight tries to deal with two enemies at the same time and does not have too much armor left. Can I absorb damage and take down at least one enemy during my next turn? Or will I lose one of my three characters, condemning my run to defeat?

The Hand of Merlin is a video game developed by Room-C Games and Croteam and published by Versus Evil. The game is right now on Steam in the Early Access program and the plan is to add more content for around six months before a full launch happens.

The core concept is simple: choose a team of three Arthurian legend-inspired characters and take the Holy Grail to Jerusalem. To do this players have to travel via nodes and battle both human and monster enemies.

The nodes can feature tough choices and resource management, games of chance, tactical battles, interactions with well-known figures of the mythos. The writing is good, as is the introduction to the core concepts, and there’s plenty of variety and choice. 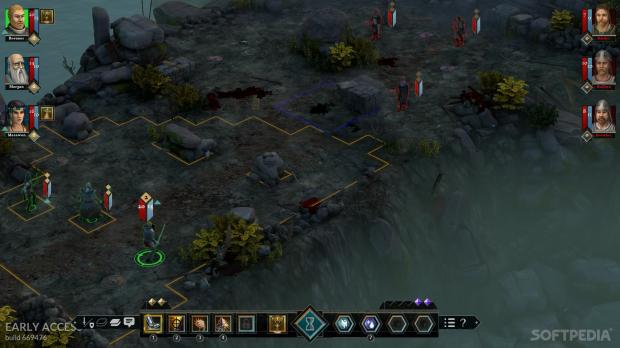 The tactical, turn-based battles are both fast and complex. Heroes can move, attack, use special abilities (more arrive via party level-up), or tap into the power of Merlin for truly powerful spells. The objective is to use armor, which can be replenished, to tank hits while taking down enemies as quickly as possible. Stacking effects and attention to enemy abilities is the key to combat success.

The Hand of Merlin suffers a little in the presentation department. The graphics are not bad and every info a player needs is present and correct, both on the tactical and strategic layer. But the environments and the characters lack personality beyond that of generic Middle Ages with fantasy elements. The sounds and music are also decent.

The Hand of Merlin is a solid game that features no major innovation for its genre. The turn-based engagements ask the player to be tactically astute and to make sure to conserve resources as much as possible. The world offers a minor new take on the Arthurian setting.

The biggest problem is that there are titles in the same genre that offer more, either in terms of rogue ideas or when it comes to combat. The fact that the title is still in Early Access allows developers to try and add some sparkle to their already good title. This can make The Hand of Merlin a more attractive proposition when it fully launches.