Sorroco uses a major attack, dealing damage to all three enemies in front of him, and then plays two blocking cards for a solid defense. The Rakoans facing me attack in vain, unable to get past my block. Unfortunately, my next hand of cards lacks defensive options, which means I use all three actions to attack, taking down two opponents. The final Softpaw manages to deliver 10 damage to Sharra but I then win the battle. The problem is that I have no healing items close by, no ink to use and I need to face a boss battle that will probably kill my party.

Roguebook is a title created by Abrakam Entertainment and published by Nacon. I spent my time with it on the PC via Steam but buyers can also pick it up on the PlayStation 4, the Xbox One, and the Nintendo Switch. The title’s biggest claim to fame is that Richard Garfield, the creator of Magic: The Gathering, was involved in its development.

Do not expect any groundbreaking innovation. The title builds on the idea of a magical book and a group of characters that seek to escape its clutches. They use ink to reveal paths through the book, cards to battle enemies, and good tactics to face bosses that guard portals to new areas.

The story itself is slim but delivered well. The game offers a fairly classical take on a fantasy world. The idea of using ink to uncover paths through the world is a good one and works both from a narrative and gameplay point of view. There’s variety when it comes to the characters and the enemy bosses but most of the writing is utilitarian. 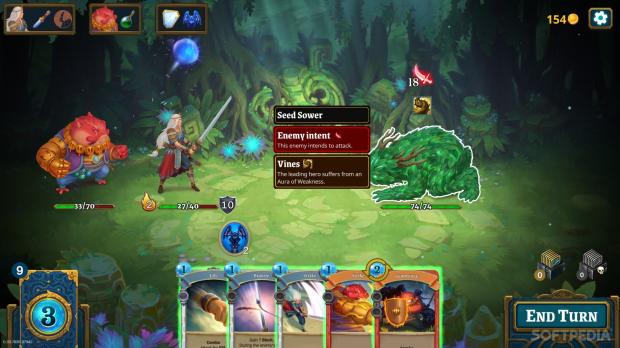 But most people don’t play a card-based role-playing game for the story. And the main mechanics in Roguebook are good bordering on great. And it all starts with the battles, which seem simple but involve plenty of careful planning and quick thinking.

There are always two heroes on the battlefield and they can face anything from one solitary artillery piece or a group of shaggy animals with a tortoise leader to a massive mechanized boss or a shaman and his followers. They take turns acting and the moves of all the enemies are always clear. Each round the player draws cards into his hands, using them to attack, block, or improve his party’s abilities.

Blocking incoming damage is the most important thing, especially when facing normal enemy types. Creating synergies between player heroes, based on their position and the cards each has, is the second priority. It’s easier to defeat enemies who cannot hit with their attacks or are unable to actively defend. Finally, it’s important to choose when to attack and how. The battles are mostly fun and challenging.

Outside of combat, Roguebook introduces an interesting exploration idea. The player can see only a sliver of the world he is in and needs to use ink, in various incarnations, to reveal more (there are also towers to be found). Apart from combat encounters the maps feature interactions to get more cards, as well as healing potions, some interesting events, pages, vendors, and piles of gold. The game creates interesting choices by linking ink to success in combat.

At the end of the world are bosses. They are tough and require good card management and planning to defeat, as well as a dollop of luck. When defeat inevitable comes the game asks the player to use pages to unlock bonuses for the next run (which can feature new heroes and expanded card options).

The gameplay loop is balanced, giving players options while also encouraging them to understand their heroes and cards better. The inking action is also an interesting take on world discovery. The biggest issue is the limited appeal of the world and story.

Roguebook has a very classic fantasy look that will be easy to process for anyone who has played a similar title before. The characters and cards look good but there’s nothing new to draw attention to, apart from some of the bosses. The interface is good, offering relevant info and making the battles easy to engage with. The sound design is generic, designed to fit the fantasy world but with nothing to make it stand out. 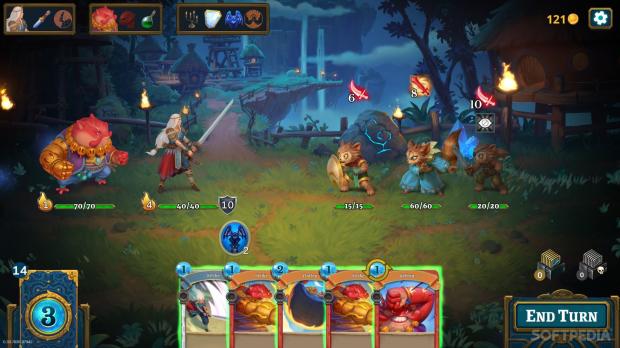 Roguebook is a competent game, both a good and a bad thing to be in the crowded rogue and card game spaces. For a newcomer, this is a solid entry-point, with engaging battles, a good long-term progression, and an interesting way to explore. For someone who has played the obvious inspirations the ink-linked ideas are not innovative enough.

The team at Abrakam was too conservative in its approach. The game needs more weirdness and more tweaks to the battle formula to stand out. If they get the chance to create another Roguebook experience they need to take the good bones of this game and then push the entire genre forward in some way.

Review code provided by the publisher.