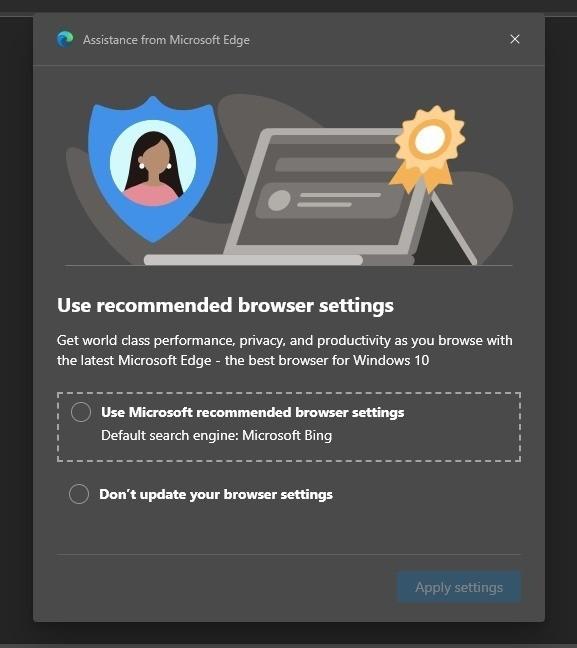 Microsoft has finally fixed an issue that caused Microsoft Edge to insist on setting Bing as the default search engine after a recent browser update.

The issue was first reported a few weeks ago after Edge 91 was officially released, with several users explaining they’re getting a nag screen that keeps coming back and prompts them to change browser settings to enable Bing as the default search engine.

But according to a report, Microsoft has now shipped a new update that resolves the whole thing, essentially allowing the prompt to show up just once and then remember the user settings without nagging them again to change the search engine configuration.

The annoying screen that has made many think Microsoft is returning to its old habit of forcing a potential switch to one of its services, in this case, Bing, tells users to “use recommended browser settings” and shows up after updating the browser.

“Get world class performance, privacy, and productivity as you browse with the latest Microsoft Edge – the best browser for Windows 10,” the prompt reads.

The first option, which is also the recommended one and highlighted in the prompt, changes the default search engine to Microsoft Bing, while the second one is called “don’t update your browser settings.” If you choose the second and then save your settings, the nag screen previously showed up repeatedly.

Microsoft said it was just a bug, and it promised a fix, which according to the aforementioned source is now available for download.

The nag screen never showed up on my device, so most likely, not everybody encountered this problem. However, everything is supposed to be fixed now after the most recent update.