Microsoft Edge Gets Welcome Update to Fight Against Blurry Fonts 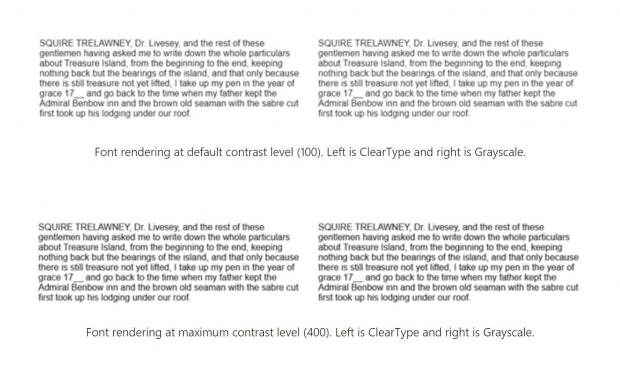 Microsoft Edge is a browser that’s getting better and better, and now Microsoft has announced a welcome change that is supposed to further polish the font rendering in the latest Canary version of the application on Windows.

Thanks to this addition, the contrast enhancement and the gamma correction will now align with the quality and clarity of other native Windows applications, Microsoft says, with font rendering to also respect the user-defined ClearType Tuner settings.

If you want to try out the new contrast enhancement and gamma correction of text in Microsoft Edge Canary, you can do this by enabling the following flag;

Coming to users with the stable version of Edge 92

Microsoft says the improved font rendering is projected to go live for all users in Edge 92 stable, and it will be enabled by default once ready for board availability.

“Like many native Windows applications, Legacy Microsoft Edge utilized the DirectWrite framework to render glyphs to the screen. The benefit of using DirectWrite is that certain system-wide user settings are respected and use the same rendering pipeline across all other native Windows applications,” Microsoft explained in an official announcement.

“Chromium, by contrast, only utilizes DirectWrite for part of the text-rendering pipeline: font enumeration, glyph information retrieval, and glyph bitmap generation; it handles its own text shaping, layout, and rendering. This enables code reuse across platforms, but on Windows, the results are typically different than the rest of the system’s text rendering.”

Needless to say, Microsoft says it expects the other Chromium browsers to adopt the improved font rendering it developed as well, therefore allowing them to feel more like home when running on Windows. Google Chrome is probably the first to get it, though for now, the Mountain View-based search giant hasn’t announced any plans in this regard.