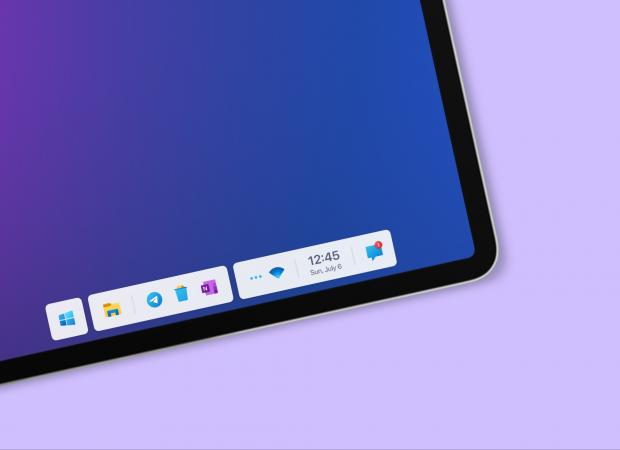 The Windows taskbar is evolving in Windows 11, with Microsoft moving all icons to the center of the screen, along with the Start menu.

The system tray, on the other hand, is pretty similar to the one in Windows 10, but without a doubt, a centered look is something that could cause some confusion among those making the switch to Windows 11.

Microsoft, however, says the whole thing is supposed to boost productivity on Windows 11.

“We’ve simplified the design and user experience to empower your productivity and inspire your creativity. It’s modern, fresh, clean and beautiful. From the new Start button and taskbar to each sound, font and icon, everything was done intentionally to put you in control and bring a sense of calm and ease. We put Start at the center and made it easier to quickly find what you need. Start utilizes the power of the cloud and Microsoft 365 to show you your recent files no matter what platform or device you were viewing them on earlier, even if it was on an Android or iOS device,” the company said in the original Windows 11 announcement.

But someone on reddit has come up with a new and more modern approach. The floating taskbar that you can see here is divided into multiple parts, including the system tray itself, while the Start menu is getting its very own pane that’s aligned to the left of the screen.

At the first glance, this approach would make much more sense on touch devices, such as 2-in-1s, though the space between the icons and the separators seems to be eating up quite a lot of space.

Needless to say, the design looks good, but as with everything proposing big changes in Windows, don’t expect such a dramatic refresh to happen in Windows 11.