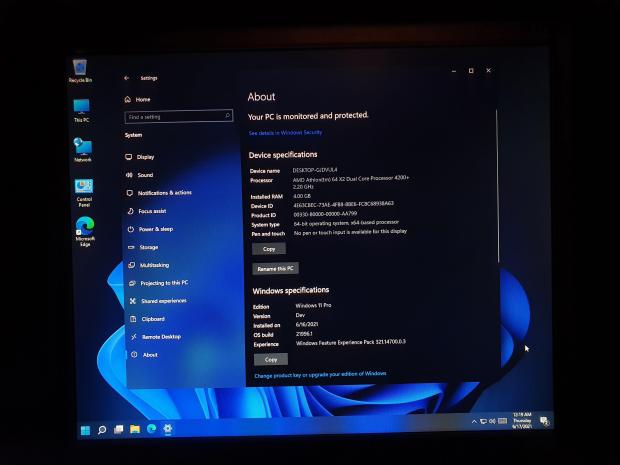 The Windows 11 build that got leaked earlier today is a great opportunity not only to find out what’s coming in the next operating system but also to figure out if your computer can run the next Windows.

And as it turns out, Microsoft is specifically working on making Windows 11 feel like home on old hardware as well, though, for the time being, it’s obviously too early to discuss system requirements and everything else given the new OS hasn’t been announced officially.

Someone on reddit, however, tried a rather simple experiment, installing Windows 11 on a 2007 computer with an AMD Athlon 64 X2 4200+ processor and just 4GB DDR2 RAM.

And the results are impressive, though installing Windows 11 on such an old system also requires some tweaks to deal with TPM and UEFI. And then, you may also need to disable some services, including Windows Defender, in order to boost the performance of the system.

While for many Windows 11 running on old hardware is good news because the upcoming operating system could therefore breathe new life into an ancient system, it’s important to keep in mind that the leaked build is still essentially Windows 10 with a bunch of improvements here and there.

So in theory, it’s just Windows 10 on steroids, which means Windows 11 should technically run on all systems where its predecessor was running already.

The question that everybody is hoping Microsoft would answer on June 24, however, concerns the pricing of Windows 11. Will the new operating system be offered as a free update to existing users or not?

This is something that remains to be seen, but expect Windows 11 to be free of charge for those on Windows 10, though a confirmation in this regard would only be offered next week.