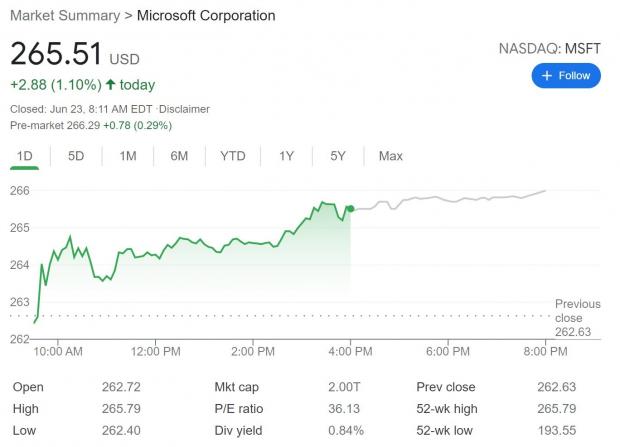 All the excitement surrounding the next Windows version has brought Microsoft back on everybody’s lips, and this, in turn, means the company’s market cap recorded a substantial boost lately.

And this week, the boost has been so substantial that Microsoft’s stock reached $265.79, therefore pushing the company’s market cap to $2 trillion.

Microsoft, therefore, becomes the second company in the world to reach this milestone, after tech giant Apple also surpassed the $2 trillion threshold several months ago.

The debut of Windows 11

Needless to say, Microsoft’s investments in the cloud is the one bringing home the bacon, though, at the same time, it’s pretty clear the company’s full strategy is working like a charm as well.

Products like Microsoft Teams have made a big impact lately, and now that a new Windows version is just around the corner, the software giant has managed to catch everybody’s attention.

Instead of launching a new Windows 10 feature update, Microsoft wants to take the wraps off a new full Windows version that would be called Windows 11. An official announcement is planned for June 24, with the company to then start rolling out preview builds of the new operating system to users in the Windows Insider program.

If the same release calendar as before is used, then Windows 11 could land for the first wave of devices in the fall of the year – Microsoft typically releases fall feature updates for its operating system in October or November, and there’s a good chance the same schedule would be used for Windows 11 as well.