We Are Football Review (PC)

Kellogg delivers a long pass from defense, Troy passes it wide, Muhammad Walker picks it up and dribbles. My star left-wing attacker then delivers a cross that reaches Webb in the box, who makes it two-nil against a team that’s Tottenham with the serial numbers filed off. This is my second goal after losing a player to a red card. And this victory at home will probably net me the number one position.

We Are Football is a video game created by Winning Streak Games and published by THQ Nordic. Available only on the PC via Steam, the title aims to deliver a classic take on sports simulation that stands out when compared to the better-known Football Manager.

The simulation’s structure is built around one-week blocks, which usually feature one or two matches and plenty of club work. Gamers can engage with almost all the major elements of a modern organization, from training and player development to sponsorship and fan interactions. Almost anything can be delegated by those who wish to focus only on picking a team and its tactics. The computer seems to do a good job on most tasks. 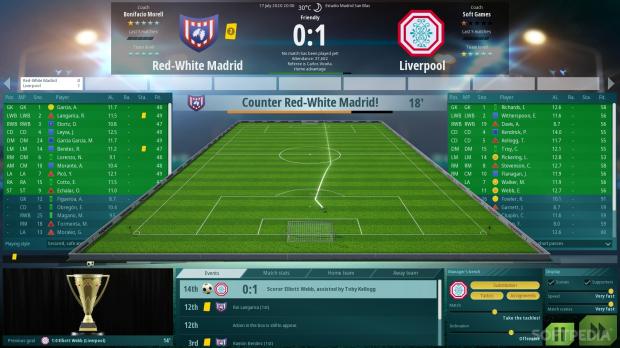 The match screen is one of the best features of We Are Football. It offers plenty of info and beautifully shows what’s happening on the pitch without using a 3D engine. The sections of the game that deal with selection, training, tactics, and instructions are also good. They introduce plenty of ways to tweak a setup and adapt without feeling overwhelming at any point.

The number of tactical roles is a little limited for my liking but I appreciate how the game tackles player abilities and skills and makes it easy to pick a good team (and to transfer the players best suited for one). But playing a few matches also quickly reveals a big weak point: too many goals and many easy victories.

My Liverpool (admittedly a big club with impressive players) has put 6 past Leeds and 4 past City at home. There was almost no challenge in getting past the equivalents of Chelsea or United. Even matches that started on equal footing led to two-nil victories with goals coming in the final ten minutes. Most of the time the game seems easy from a tactical standpoint, as long as you have fit first-choice players. Opposition teams do not spring surprises and seem to pick less than adequate starting elevens.

Player condition and injuries do create problems as a season progresses, which is very close to what happens in the real world. Dortmund managed to get 3 goals past my keeper at Anfield in November in a Champions League match I needed to quickly forget. The all-crucial Christmas period had me struggling to create a good defense but my reinforced attack bailed me out and kept me in first place for the new year.

We Are Football is an enjoyable experience that puts less pressure on the player’s time than Football Manager. The press interactions are rare and it’s not as important to constantly talk to players. The focus is on the core mechanics that influence a match and its results and that’s commendable. But for many football fans, the problem with We Are Football will be that none of the names are real.

You can choose your favorite club and the details are pretty close but the players, even the ones modeled on real-world counterparts, have random names. This makes it harder to form a connection with a youngster, to feel the pain of an aging captain, and to generally invest feeling in a club’s fortunes. The game does offer a full editor, which the community will probably quickly use to create custom databases, but this is not a replacement for licensing likenesses and names.

We Are Football has a good presentation that’s easy to use once a player learns where everything is and how all the systems work. Most actions are intuitive and quick, making it easy to plan the week and then execute it. The bright colors underline the less serious tone when compared to the dominant force in the field. Unfortunately, the same attention does not extend to the music, which is both uninspired and repetitive. The rest of the sound design is also adequate but unimpressive. 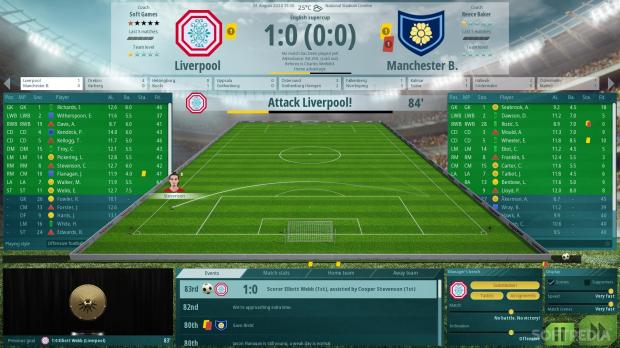 We Are Football is an intriguing attempt to offer another take on the football management genre. The game has a very good match presentation and some solid club-focused mechanics but I am not sure that this is enough to make it a contender. The developers really need to get at least one major league full license (the Bundesliga is probably the most accessible) to draw fans in. An editor that is both faster and easier to use just to engage with names would also help.

The football management space needs more options and more innovation. The developers clearly try to focus on the match and the squad interactions while also offering more club-based features for those who want it. I liked the time I spent with We Are Football but it’s unlikely that I will use it to play a ten-year-long Liverpool campaign anytime soon.