The Justice Department announced Tuesday the seizure of several Iran’s state-linked news website domains accusing them of propagating “disinformation”. This action appears to be a broad attack on Iranian media amid heightened tensions between the two countries, says CBS News.

Iran’s state news agency IRNA reported the seizures by the U.S. government without providing further information.
The press release said that U.S. authorities managed to shut down three dozen websites. Most of them were linked to Iranian disinformation efforts.

Relations between Iran and the United States have worsened in the years since then-President Trump’s pullout from Tehran’s nuclear deal and the reintroduction of crippling sanctions against the country. Iran has gradually abandoned all limits on uranium enrichment as a result of this decision. In fact, enriching uranium is up by 60%, which is quite a peak, but still far from weapons-grade levels.

At the same time, world powers have been working to restore Tehran’s 2015 nuclear deal, just days after Iran’s hard-liner judiciary chief, Ebrahim Raisi, was elected. Known for his antipathy toward the West, Raisi laid out a hardline posture in his first news conference on Monday.  He ruled out meeting with President Biden or discussing Tehran’s ballistic missile program or support for regional militias. Both matters are of utmost importance for the Biden administration.

Iran wants to expand its influence

Iran is seeking to expand its influence and deal with enemies by supporting terrorist groups in the region, including the Hezbollah in Lebanon and the Houthi rebels in Yemen.

The websites were seized “as part of law enforcement action” by the US Bureau of Industry and Security, Office of Export Enforcement, and the Federal Bureau of Investigation, according to the notice. 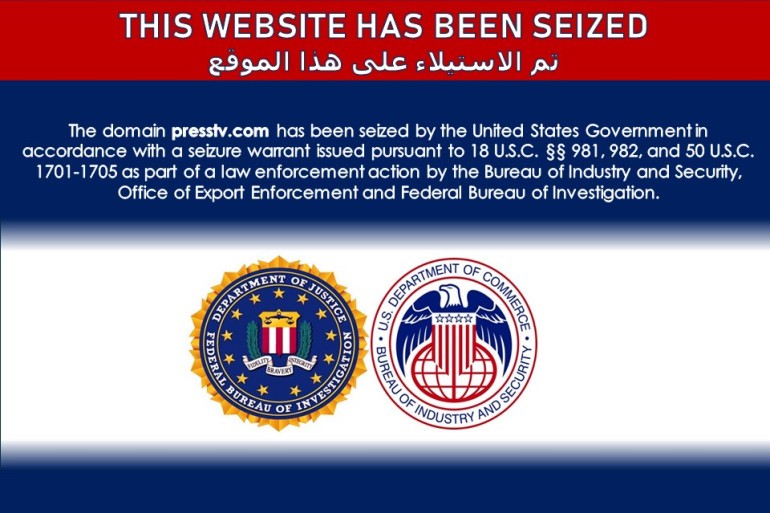 International condemnation may arise for violation of sovereignty, as country-specific domains have been seized, such as Iran’s “.ir”.

Nonetheless, we can see “.net”, “.com”, and “.tv” domains among the seized domains (TLDs). Two of them are generic TLD’s rather than country-specific domains, while “.tv” belongs to the Pacific Island Nation of Tuvalu, managed by the American company Verisign.