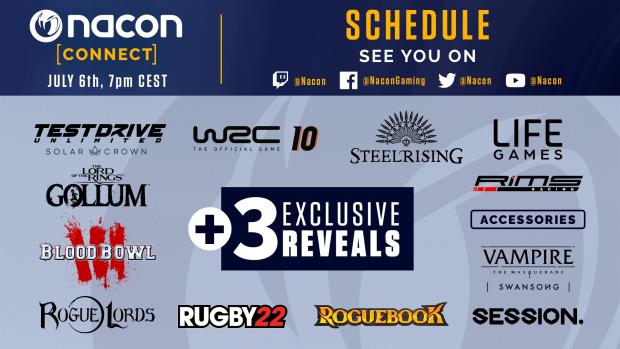 Just like last year, NACON will be showcasing its upcoming titles during a dedicated event. Alongside already announced games, NACON confirmed that new titles will be revealed too. Dubbed NACON CONNECT, the event is scheduled to take place on July 6 at 6:00 pm BST / 7:00 CEST on Twitch and YouTube.

A handful of games have already been confirmed to make an appearance at the show, including Blood Bowl 3, RiMS Racing, Rugby 22, Steelrising, The Lord of the Rings: Gollum, Vampire: The Masquerade – Swansong, Test Drive Unlimited Solar Crown, and WRC 10.

A few months ago, NACON added a new category to its games portfolio, life simulators. The publisher announced that five such titles are in development: Train Life, Hotel Life, Chef Life, Surgeon Life, and Architect Life. We’ll most likely see some of them during NACON CONNECT this year.

As mentioned earlier, new games that we don’t know of will be revealed during the show too. We usually don’t like making any assumptions and prefer to be surprised when it comes to new IP, so here’s hoping that we’re getting some interesting new games from NACON this year.

In fact, according to the company, there will three exclusive revealed during the show, which is quite alright for a publisher like NACON. We’ll also probably get another look at some of NACON’s games that have already been released in some form (i.e. Early Access, demo), such as Rogue Lords and Roguebook.

Finally, NACON is expected to reveal some new accessories as well. New controllers and headphones are likely to be introduced too, but the meat of the show will probably be the games. Well, let’s just hope so, since last year the NACON’s event was a bit of a blunder, as most of the show was comprised of interviews with developers.