My mage has one more good fireball in him before mana is out and he has to resort to his basic attack, which is relatively weak. I use that for maximum effect and get my fighter close after he bashes some undead heads in, making him a target. My archer flanks, poisons, starts some fires, and then executes some shambling corpses. Only 22 more to go.

The Last Spell is a video game created by developer Ishtar Games and published by The Arcade Crew. The game is available on the PC via Steam in Early Access. It takes ideas from the tactics, role-playing, and rogue-lite genres. The blend is solid, designed to test skills and reward careful planning and execution.

The concept is based on a simple idea: three heroes need to protect an altar and mages who are working to banish magic. The implication is that some meddling from other mages led to the creation of the waves of the undead that assault the location each night. There’s not too much narrative in the game but it works well to set up a situation and get the player to engage. 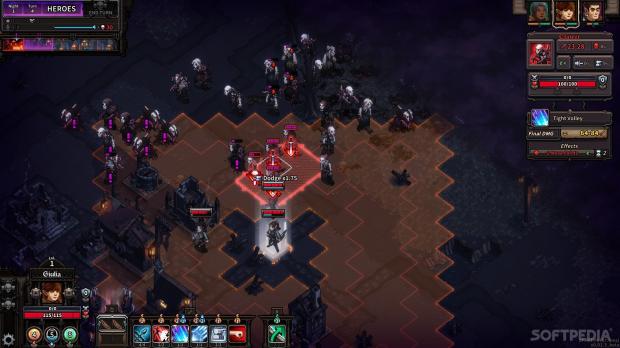 The gameplay is built around turn-based tactical battles. The three player-controlled characters have both movement and action points, as well as access to both normal attacks and very powerful special abilities. Lightning strikes, flaming arrows, poison, big hammers, fireballs, and more are needed to deal with the incoming zombies, who have numbers on their side. The Last Spell manages to make gamers feel powerful and vulnerable at the same time.

Fights are relatively hard from the start and become more challenging night after night. During the day, players can use gold, materials, and workers to improve defenses and put together buildings that can improve their performance.

The Last Spell goes for the retro look and delivers on its very well. There’s just enough detail to the world, the heroes and the enemies to keep them interesting. Town management and character work are easy to perform before the next round of combat. The icons for moves and powers tend to quickly inform the player about their best use.

Special mention goes to the soundtrack. It is created by The Algorithm and does not fall into the trap of going high-fantasy or medieval. It is thumping, driving, powerful, designed to underline the desperate stand that the player is taking.

The Last Spell has good mechanics and solid presentation, Given that it will be in Early Access for a while, it will be very interesting to see how the development team can augment these solid fundamentals.

I would like to see an update to the town management aspect of the experience, with more unique ways to boost the featured heroes. A little more personality for them would also be nice. The Last Spell is an interesting combination of ideas that will certainly appeal to fans of tactics-focused experiences.