An orphan earring and a bottle filled with sleeping pills. A golden dolphin. One retired army man who seems to be interested in secrets and morals. A no-good husband with life insurance to his name. A dashing captain, taking charge of his ship and more. A teary young woman and an older matron with a keen eye. A gambler with a penchant for lost things. These are classic ingredients for an Agatha Christie mystery. And when you’re the killer they are all obstacles standing between you and freedom.

Overboard! is a video game both created and published by inkle. I enjoyed it on the PC via Steam and the title is also offered on GOG, as well as on the Nintendo Switch and the iPhone via the App Store. The development team has managed to take the core ideas of classic adventure titles and make them shine innovatively.

Veronica Villensey (alliteration and allusion in one name) is the lead of the game and the killer. She offs her husband, who seems like a terrible human being, while they are sailing to America to start a new life (just what a potential killer needs!). But taking out bad people is not exactly legal and our heroine was not exactly careful when doing the deed. So the game is built around her attempts to make sure that she does avoid prison and maybe get some money from her husband’s insurance. 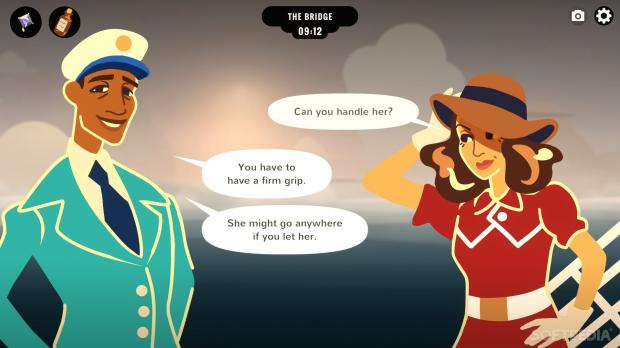 In terms of gameplay Overboard! is very simple and easy to play. Conversations with characters drive much of the action, giving players a chance to gather information and influence behavior. In certain circumstances, the main character can get items or execute actions. There are only eight hours before arrival at Liberty Island and Veronica cannot do everything she wants. So the trick is to prioritize a course of action that makes sure she escapes a murder charge and only go looking for extra clues or options if you have time left.

There’s a lot of writing in the game and it manages to be both functional and expressive. All the characters have quirks and personalities while Veronica is shaped by the player and his choices. I might have appreciated a little more time and maybe one or two more people to talk to but it’s clear that the development team wanted to create a tight and quick experience.

One run-through Overboard! only takes around 30 minutes. My first one ended with a quick conviction because I didn’t know the social landscape that I had to navigate and how exactly to influence someone. On my third, I was already thinking about a complex plan that would end with an escape, money from insurance, and even a little bit more. I then spent hours trying to implement it and finding out more about the characters and thinking about cooler potential options.

It’s easy to say or do something stupid that gets Veronica into jail, especially early on. But the game offers plenty of tools to avoid frustration. It’s easy to jump over dialogue that’s already seen and to move past lines when you read fast. There’s also a helpful log to keep track of various investigative challenges. The team is confident in their story and endings and wants to make sure players see as much of them as possible in the shortest time.

Within the limitations of its structure, the game is a small jewel. I would have loved a little more complexity for the conversations, especially the final showdown. I also don’t like the option to rewind a scene for only one time, which feels like a temptation that’s not needed given how fast a play-through is.

Overboard! features a presentation style that will be instantly familiar to a fan of inkle experiences. The mix of retro, Art-Deco, and cartoon-like graphics works well for all the characters, especially Veronica. The interface is easy to use, offering the player quick access to all quality-of-life elements. There’s no voice acting for the characters, which is a good choice for this kind of experience. This leaves space for players to think and to enjoy the music, jazzy and well-suited to the action. 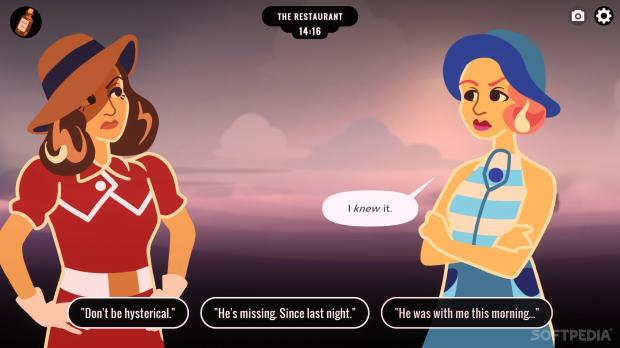 Overboard! is a great game for anyone who has played a previous inkle title and liked it. The characters are fun, the lines of dialogue are well-written, the possibilities are all interesting. Veronica manages to be sympathetic despite being all too capable of murder. The replay value of the experience is higher than for any of their previous titles. This means that even for newcomers to the genre this is a great title to take a chance on.

I love the ship and the personalities that reside on it, each with its own issues and secrets. I would love to see how the developers can expand it, maybe telling another story from a different perspective or by moving the protagonist into another space. Overboard! represents a clear way for the narrative and choice-driven adventure title to evolve in cool ways.