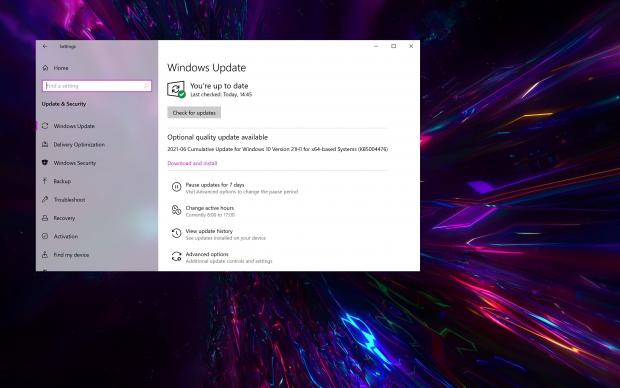 Microsoft has released a new Windows 10 cumulative update for the most recent stable versions of the operating system, with users allowed to download it from Windows Update with a manual check for updates.

It comes with plenty of improvements, including fixes for the blurry text on the news and interest button and an audio glitch that’s also impacting Windows 10 version 21H1.

According to Microsoft, KB5003690 resolves “issue with Search box graphics on the Windows taskbar that occurs if you right-click the taskbar and turn off News and interests. This graphics issue is especially visible when using dark mode.”

Furthermore, this new cumulative update fixes a bug that made it impossible to sign in to Windows 10 using a PIN, as well as the gaming performance problem that was introduced by a previous cumulative update.

Next Patch Tuesday in July

Microsoft says it has also resolved Japanese IME and VR-related glitches in Windows 10.

The update fixes “an issue that causes the Japanese Input Method Editor (IME) to suddenly stop working while you are typing,” Microsoft says, while also adding that it includes patches for “an issue that, in certain cases, takes you out of the exclusive virtual reality (VR) app and back to Windows Mixed Reality Home when you press the Windows button on the controller.”

There are no new known issues in this cumulative update as compared to the previous releases, but it remains to be seen if new ones are discovered by the time the rolled out to all Windows 10 devices begins as an automatic update via Windows Update.

The next Patch Tuesday will take place in July, and at that point, all improvements in this update would be automatically pushed to all Windows 10 devices running the aforementioned OS versions.