Three villagers have a good house, a fire to warm by, places to sleep in, shrines to pray to, even entertainment for their limited downtime. They lack a fully functioning system to obtain new knowledge. They also have nothing in the way of weapons. So they perish when they fail to defend against a raid launched when they welcomed one runaway. I think I know how to do better with my next group.

Going Medieval is created by Foxy Voxel and published by The Irregular Corporation. The game is at the moment in Early Access on Steam and it seems that the plan is to work on it for at least a year before a final release.

The game charges players with guiding a group of settlers who are looking to build a better life in the XIV century. The game has a lot of options for scenario design but I choose to start with a normal stockpile and a full array of potential problems.

The villagers need to create everything required to survive, from housing to weapons and fortifications. Seasons come and go, with their distinctive threats. Enemies pop up from time to time. Getting all the food and praying done inside a 24-hour cycle is often hard. 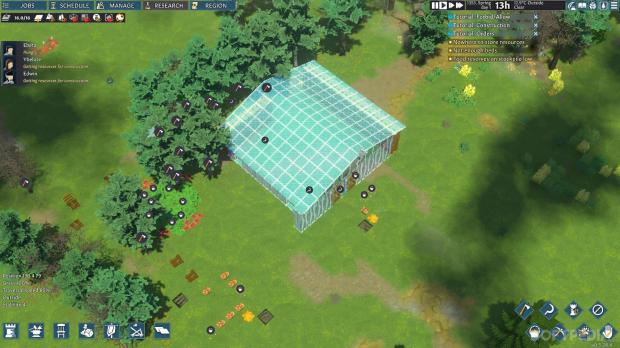 Going Medieval relies on indirect control to make control easier. Choose that area to cut down trees. Use this permission tool to make sure that characters do not touch certain goods. A player can explore the personality of each villager and then choose which tasks he can or cannot engage with. The game offers plenty of depth for management-oriented players.

As more knowledge is accrued and more options open up gamers will have to deal with increased complexity. Dilemmas sometimes pop up with challenges and rewards. The world outside the settlement comes knocking for interactions.

Going Medieval has a distinctive look that makes low detail an asset. From the middle distance, with players focused on building and management, the game is beautiful enough. Zooming in reveals the small amount of detail associated with both characters and the world itself. The nature of the experience means that I was never bothered by the graphics. The sound design, especially the soundtrack, is very well suited to the theme.

Going Medieval represents an interesting take on a familiar genre. The XIV century poses plenty of challenges for a small group of humans looking simply to survive. There’s more to deal with for those aiming to prosper.

Foxy Voxel clearly has plans to expand many of the game systems. The limited appeal of the graphics style will probably not deter fans of the genre while introducing more ways to create and interact with the world will attract more players who want to go from humble beginnings to impressive civilizational heights in Going Medieval.