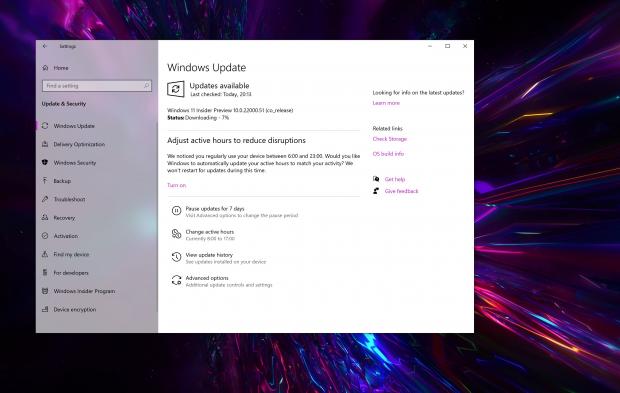 Microsoft has just released the very first Windows 11 preview build, with insiders in the Dev channel now allowed to try out the new operating system on their devices.

The first Windows 11 build is 22000.51, and aside from Microsoft Teams integration and support for Android apps, pretty much all the big features announced last week are already there.

You therefore get the new Windows 10X-inspired Start menu, widgets, the new Microsoft Store and everything else on your device.

“Widgets bring you closer to information you both want and need. Just click on the widgets icon on the Taskbar, swipe from the left using touch, or hit WIN + W on your keyboard, and your widgets slide out from the left over your desktop. You can personalize your experience by adding or removing widgets, re-arranging, resizing, and customizing the content. The set of widgets we provide currently focus on your calendar, weather, local traffic, your Microsoft To Do lists, your photos from OneDrive, sports and esports, your stock watchlist, and tips,” Microsoft explains.

Keep in mind, however, that installing such an early Windows 11 preview build also comes with an increased likelihood of bugs, so you shouldn’t download this release on your main system.

Microsoft says it has also included a feature to let users know how long it takes to install a Windows 11 update.

“We are providing estimates for how long a restart for updates would take. When your PC is pending reboot for a quality update, you will be able to see estimates on your power menu under Start, in restart notifications, on the Windows Update Settings page and inside the Windows Update icon that shows up at the lower right of Taskbar. This feature is rolling out to a subset of Insiders in the Dev Channel at first so not everyone will see this right away,” the company says.

Windows 11 is projected to launch for everyone in the fall.