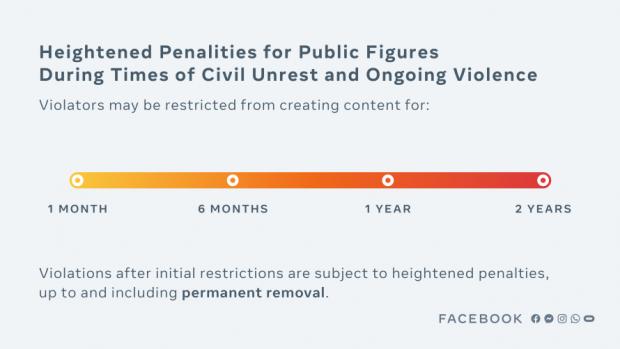 Former U.S. President Donald Trump wouldn’t be allowed to post on Facebook for two more years, according to the social network.

Originally banned on both Facebook and Instagram earlier this year following posts related to the Capitol violence, Donald Trump is still blocked from publishing new messages on the two social networks.

And Facebook said in an announcement that it wouldn’t remove the ban until 2023 due to the gravity of the circumstances involved in the penalty.

Furthermore, Facebook says it’s also introducing heightened penalties for public figures, with the bans to now start at 1 month and go up to 2 years.

“We are today announcing new enforcement protocols to be applied in exceptional cases such as this, and we are confirming the time-bound penalty consistent with those protocols which we are applying to Mr. Trump’s accounts. Given the gravity of the circumstances that led to Mr. Trump’s suspension, we believe his actions constituted a severe violation of our rules which merit the highest penalty available under the new enforcement protocols. We are suspending his accounts for two years, effective from the date of the initial suspension on January 7 this year,” Facebook said.

Donald Trump must behave once the ban is lifted

Facebook says that once Donald Trump is unbanned and he starts using the social network again, the company will monitor the new posts and if any violations are detected, the former president would be once again banned. Furthermore, a permanent ban is totally possible, Facebook says.

“In establishing the two year sanction for severe violations, we considered the need for it to be long enough to allow a safe period of time after the acts of incitement, to be significant enough to be a deterrent to Mr. Trump and others from committing such severe violations in future, and to be proportionate to the gravity of the violation itself,” the company said.