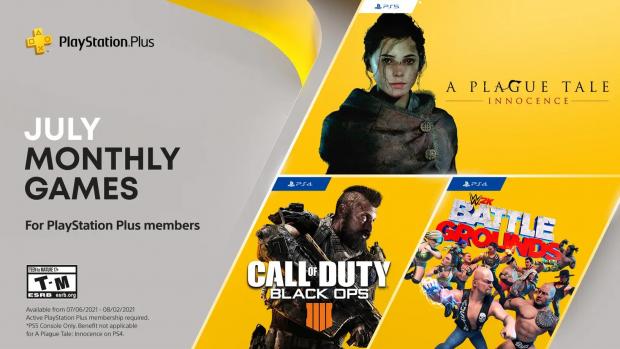 Sony PlayStation has just announced the freebies PS Plus subscribers will get in July. The highlight of the trio of games is clearly Call of Duty: Black Ops 4, but for those who don’t like shooters, there’s another high-profile title that we can’t recommend enough, A Plague Tale: Innocence.

Developed by Asobo Studio and launched on PC, PlayStation 4, and Xbox One two years ago, A Plague Tale: Innocence will be getting a sequel called Requiem, which is set to arrive in 2022. On top of that, the team behind the franchise announced during E3 2021 that PlayStation 5 and Xbox Series X/S versions of the game will be available in July.

The good news is those who haven’t yet played the PlayStation 4 version will now be able to get the game for free. The main drawback is that only the PlayStation 5 version of A Plague Tale: Innocence will be available for free for PS Plus subscribers.

As far as the other two games that will be added to the PS Plus catalog, Call of Duty: Black Ops 4 is exclusively a multiplayer experience that made its debut on PC and consoles three years ago. The third and last game coming to PS Plus in July is WWE 2K Battlegrounds, a new entry in the series that promises over-the-top, arcade action.

It’s important to mention that A Plague Tale: Innocence (PS5), Call of Duty: Black Ops 4 (PS4), and WWE 2K Battlegrounds (PS4) will be available to add to your console library starting July 6 until August 2.

On a side note, current PS Plus subscribers can still get the PS Plus games for June – Star Wars: Squadrons and Operation: Tango, which will remain free until July 5. The third PS Plus game for June, Virtua Fighter 5 Ultimate Showdown will be available on PS Plus for a second month, so subscribers can get it until August 2.