Apple Obviously the King of Wearables in Europe Too 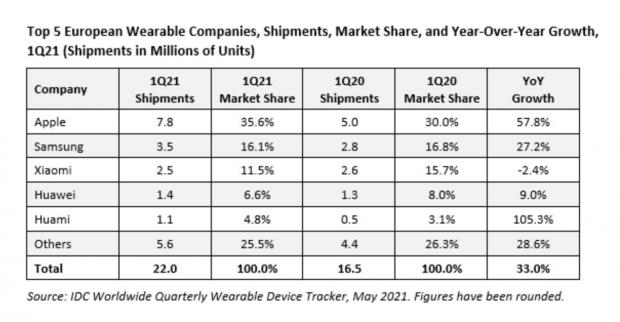 This shouldn’t necessarily be a big surprise, but Apple continues to lead the wearable market, obviously thanks to the strong sales of the Apple Watch.

And new statistics provided by IDC reveals that Apple is still the king of the castle in Europe as well, with the company selling no less than 7.8 million devices in the first quarter of 2021.

In terms of market share, this means Apple now controls 35.6 percent of the wearable market on the continent, while second-placed Samsung is far behind with just 16.1 percent. The South Koreans sold a total of 3.5 million devices during the same quarter.

Xiaomi is third in the charts with 2.5 million devices, followed by Huawei, Huami, and others.

IDC says earwear account for the biggest share in 2020, as no less than 50.1 million units sold last year in the wearable device market are part of this category. As far as smartwatches are concerned, 23.4 million units were sold last year, most of them Apple Watches.

“Watches accounted for 31.2% of the market, reaching 6.9 million units, for growth of 51.2% year over year. Apple’s WatchOS yet again surpassed market expectations. Its brand reputation and consumer loyalty have boosted purchases from both returning consumers and first-time buyers, and its decision to cut the price of the Watch Series 3 and Watch SE led to stronger demand. Other vendors are channeling their sales both online and offline, driving more opportunities in cross-border sales,” IDC says.

New Apple Watch in the fall

Apple is projected to take the wraps off a new Apple Watch in September, so in the long term, the company is very likely to maintain its lead in the market.

Furthermore, it’s believed the iPhone maker is planning massive upgrades for the 2022 Apple Watch generation, with important improvements not only in terms of design, but also as far as functionality is concerned, as the company is also developing a body temperature tracker.