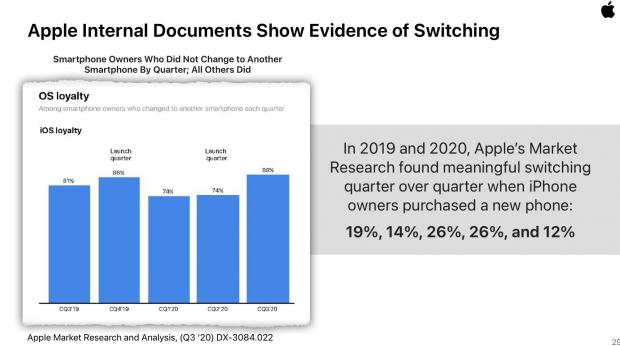 The Apple vs. Epic legal dispute reveals more and more interesting tidbits, with one of the most recent documents shared as part of the lawsuit concerning the number of iPhone owners who actually move to Android.

The data, which was published on Twitter by Ben Bajarin, CEO and Principal Analyst at Creative Strategies, was used by Apple as evidence that “choice does exist,” as some of its customers do end up making the switch to Google’s operating system.

The switching trends have increased and decreased several times, with the biggest drop in terms of iOS loyalty recorded in the second quarter of 2020. According to Apple data, the iOS loyalty dropped to 74 percent, which means 26 percent of the users moved to Android.

The third quarter of the year, however, has generated a massive increase, bringing the iOS loyalty back to 88 percent, with only 12 percent of the users ending up on Google’s platform.

But at the end of the day, it’s pretty clear that not everybody part of Apple’s ecosystem is here to stay. Apple has been bragging for years about iOS loyalty numbers, explaining that a growing number of Android users are actually making the switch to its platform.

Unfortunately, there is no data as to how many Android users end up getting an iPhone, but it’s obvious that the migration from one platform to another happens both ways. But this is pretty much the first time Apple admits some of its users are going to Android.