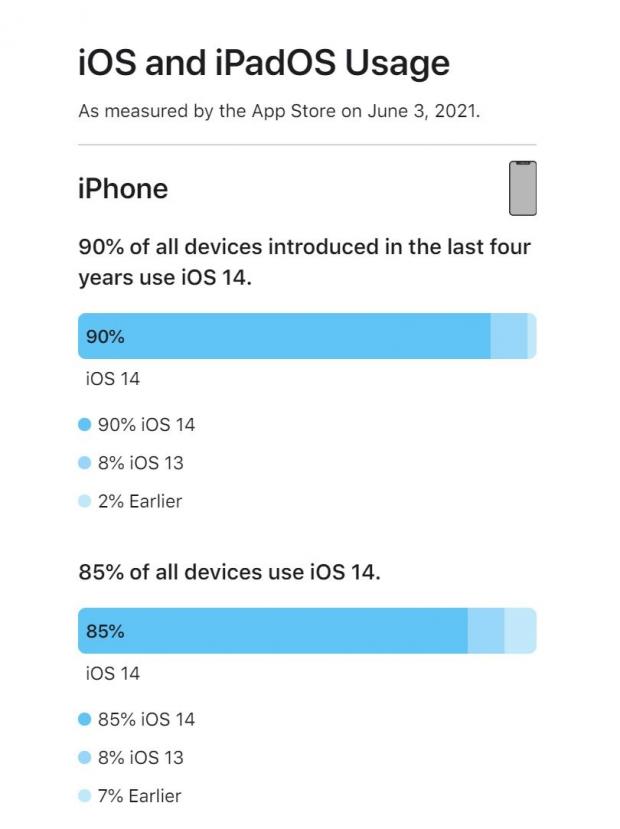 OS fragmentation certainly isn’t a problem in the Apple ecosystem, as new statistics provided by the Cupertino-based tech giant itself show that most iPhones are already running iOS 14.

Released last fall with massive improvements, including widgets, iOS 14 is already running no less than 90 percent of all iPhones introduced in the last four years. According to Apple’s numbers, only 8 percent of these devices are still on iOS 13, while just 2 percent are running an earlier version of the operating system.

When it comes to the entire iPhone base, 85 percent of them are currently on iOS 14, which is still impressive given the fragmentation that’s happening in the Android world.

Apple says approximately 8 percent of the iPhones out there are now on iOS 13 and another 7 percent sticks with an earlier iOS release.

News of this impressive adoption of iOS 14 comes just as Apple is preparing to show the world what it plans to improve with the release of the next major version of the iPhone operating system.

Apple is therefore expected to unveil a preview of iOS 15 at WWDC this week, with the company to then kick off the beta program allowing developers and public testers to try out the operating system in advance.

iOS 15 will obviously be a massive release, and people close to the matter said Apple is likely to improve not only the UI, but also the notification system bundled with the operating system. Most likely, some of the key capabilities will be showcased at WWDC, while several others would be added in the coming months ahead of the official launch.

According to the typical release schedule, iOS 15 should launch in September for all supported iPhones.